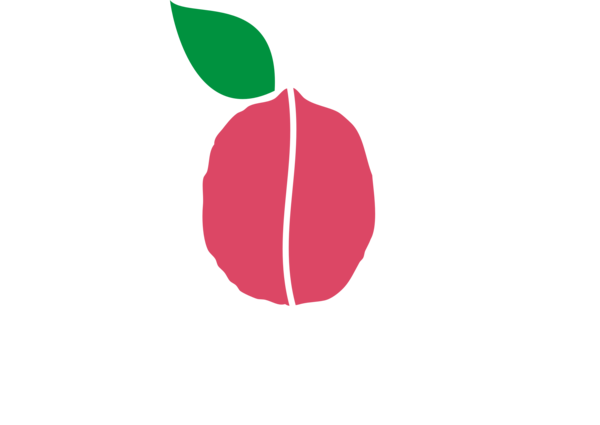 IN-STORE ONLY! 🥣 Healthy ingredients + laundry detergent = REETHA BERRY infused build-your-own laundry detergent, made with only SIX INGREDIENTS!!! Cleans and refreshes all of your laundry.

Why compromise health and wellness on your skin or NEXT to your skin?>>>>> PINK WALNUT WELCOMES YOU!

CHECK OUT OUR NEW BUILD-YOUR-OWN LAUNDRY DETERGENT MADE WITH ALL NATURAL REETHA BERRIES AND 5 OTHER SIMPLE  SIMPLE INGREDIENTS! (In-store only)

At Pink Walnut we feel that healthy products are for all.  If you come into our store you will not be turned away. All our products have a recorded price but whatever you can pay we happily accept it!

ORDER ONLINE FOR DELIVERY OR PICKUP. WE ALSO HAVE CONVENIENT CURBSIDE PICKUP. ORDER ONLINE, CALL WHEN YOU GET HERE, AND WE WILL BRING YOUR ORDER TO YOU.

Stock up on products that hydrate, moisturize, cleanse, rejuvenate from head to toe soooo deliciously!!!

We love it when our friends drop by for a sip of tea or coffee at our on-the-house coffee bar!

We could talk about changing the world if your'e of the mind... 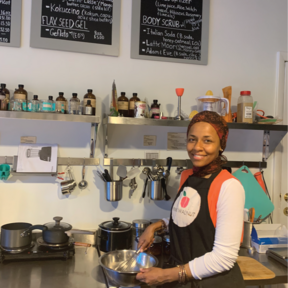 ON A MISSION TO CREATE THE MOST DELICIOUS PRODUCTS USING INGREDIENTS FROM NATURE THAT SPARK CREATIVITY AND ELEVATE CONSCIOUSNESS!

A cup of this and a pinch of that, Pink Walnut began with a recipe and a commitment to good, healthy, natural ingredients for the skin.

Najma Jamaludeen started her body care company over ten years ago as an online store under a different name. As she whipped up recipes using the most curated ingredients she became addicted to having fresh natural body care products made on demand and thought others would feel the same. The feeling of warm creams and butters in the jar was intoxicating and so Pink Walnut Body Care Bistro was born.

At Pink Walnut we consider body care as the food for skin and hair.  We believe that you should not have to compromise health for quality and feel. Walking in to our Bistro is an experience where YOUR BODY CARE IS MADE WITH YOUR RECIPES. Products are delightfully made to order by our body care Chef.

Located in the Historic Dundalk Town Center, Pink Walnut Body Care Bistro is a place where you can enjoy fresh handmade products in a super comfortable and cool environment. We have free wifi and complimentary coffee and tea everyday we are open. Once a month we collaborate with a local healthy confectionary baker to highlight natural goodies for inside your body along with FREE samples of the tasty goodies!

So, come and share our passion for healthy delicious body care. We make the good stuff! 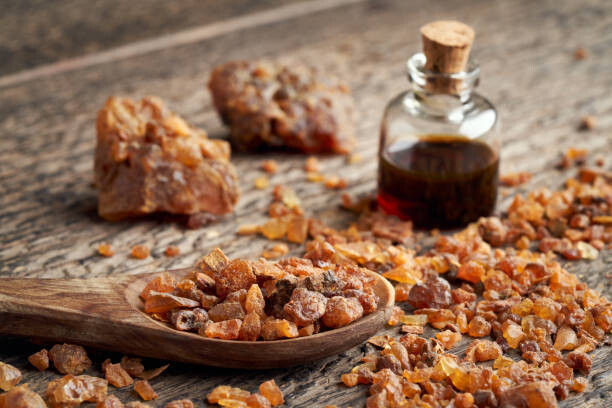 Originating from Somalia, Yemen and Ethiopia Myrrh is a resin that comes from trees belonging to the genus Commiphora. The sap-like substance, which has a unique sweet and smoky aroma, has a wide range of uses.

Antibacterial
It turns out that the Egyptians knew what they were doing when they embalmed their dead bodies using Myrrh – the antibacterial powers of this resin helped to slow decay by killing bacteria and other microbes.
A recent study found that burning Myrrh in incense form can kill airborne bacteria by up to 68 percent. Additionally, in test tube studies it has been found that Myrrh essential oil is highly effective against several different types of infectious bacteria, including some that are resistant to drugs.
Oral Health
The antibacterial qualities of Myrrh can firstly neutralize the germs and bacteria that contribute to halitosis (bad breath). Secondly it is good for the gums, reducing the redness and swelling associated with gum disease, effectively healing receding gums. There is also research to suggest Myrrh is effective for healing mouth ulcers.
A recent study looked at people with “Behcet’s” disease (an inflammatory mouth disorder) who used a Myrrh based mouthwash to treat their painful mouth sores. They found that 50 percent of them experienced complete pain relief, whilst 19 percent had a complete healing of their mouth sores.
Skin Health
The ancient Greeks and Romans were certainly on the right track by using Myrrh to treat wounds. Scientific research now confirms that Myrrh essential oil (mixed with Sandalwood) is especially effective at killing the microbes that infect skin wounds. Another study found that Myrrh essential oil used alone inhibits the growth of the fungi that causes athletes foot by 43 – 61 percent.
Myrrh benefits many other skin conditions, including; weeping eczema, bedsores, boils, acne and deeply chapped skin.
Pain Relief
Myrrh is a powerful anti-inflammatory which works by blocking the inflammatory chemicals that can lead to swelling and pain. This makes it especially useful in relieving inflammatory conditions such as arthritis and back pain. Myrrh essential oil also contains certain compounds that interact with the body’s opioid receptors that tell the brain that you’re not in pain.
Myrrh essential oil diluted in a pure carrier oil makes an excellent massage oil for sore muscles and joints and when taken internally (must be food grade), it can alleviate headaches and migraines.
Antioxidant
Myrrh has an ORAC (Oxygen Radical Absorbance Capacity) of a staggering 379,800 µTE/100g. Just for comparison, goji berries have a score of 4,310 µTE/100g and blueberries 4,633 µTE/100g. A study published in the journal "Food and Chemistry Toxicology", found that the antioxidant potential of Myrrh is so high that it may support healthy liver function.
Liver Health
A study conducted at the Beni-Suef University in Egypt found that Myrrh can actually detoxify what the liver cannot – in particular, ammonia. When the liver cannot remove harmful substances sufficiently, they build up in the bloodstream. For example, ammonia, a by-product of protein digestion, needs to be converted into urea in the liver and eliminated via the kidneys. Accumulation of ammonia in the blood, called hyperammonaemia, is toxic to nerves and can lead to a decline of brain functions known as hepatic encephalopathy.
Excessive ammonia is particularly dangerous because it provokes the over-production of nitrogen and oxygen free radicals. Free radicals steal electrons from the lipids in cell membranes, leading to cell damage.
The team of researchers looked for a remedy in Myrrh, whose antibacterial, anti-inflammatory, antioxidant, sugar-reducing and liver-protective properties have been used traditionally for the treatment of several diseases. They found that Myrrh induced the production of several antioxidant and detoxifying proteins in the liver, kidneys and cerebrum.
Respiratory Health
Finally, Myrrh has powerful decongestant properties. Diffusing Myrrh essential oil in an aromatherapy oil burner can clear excessive mucus and provide relief from coughs, colds, bronchitis and asthma.

Save this product for later
Display prices in: USD

"These products are MAGIC!"